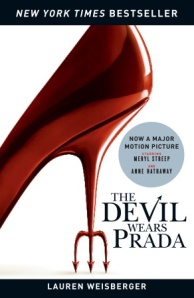 I never thought I’d say this about a book, but here I am, saying it: skip the book, and watch the movie instead. Anne Hathaway’s Andrea is a far more charming, sympathetic, and interesting character than the Andrea Sachs of this book.

The basic plot* is not so terrible; Andrea wants to be a writer for The New Yorker, a goal which she will do anything to achieve, including taking a miserable job for Miranda Priestly, the editor-in-chief of the fictional Runway Magazine. The premise of the book is that a year as Miranda’s assistant will open doors that years of doing legitimate writing will not. Andrea leaps from abuse to drama to abuse, clinging to her holier-than-thou attitude. At the end of the book, she (oh so shockingly) leaves the company to move on to greater things. Big surprise.

The writing is not strong; the characters remain flat and undeveloped, inviting only the barest amount of sympathy from the reader. None of the characters make you root for them, instead Andrea whines and leaves you wondering when she’ll just stop. (The answer, by the way, is page 360.) Miranda is a monster, of course. Her demands are truly unreasonable and she asks more of her assistants than any boss has a right to ask. She makes a great (if sometimes repetitive) villain. She makes a demand, Andrea struggles, Andrea meets the demand, repeat ad nauseam.

Instead of seeing her co-worker, Miranda’s senior assistant Emily as an ally, Andrea sees her as another enemy. “Just fucking shut up already! You march into this office and think you understand everything. Little Miss I’m So Sarcastic and So Above All This! You don’t understand anything. Anything!” (208) Emily screams, and Andrea just doesn’t get it. It occurs to her at one point near the end of the book that if she had ever once seen Emily as an ally instead of an enemy, she could have had a friend and her year would have been less miserable.

There are other scenes in the book which will make most readers roll their eyes:

Perhaps the most annoying part of the whole book, the thing which drives me the craziest, and annoys me more than the shallow, whiny characters, is the fact that Andrea Sachs, a girl who apparently graduated from Brown and is a brilliant writer says “natch” more than once.

All-in-all, if you don’t mind removing your brain for a few hours while you read it, the book has its entertaining moments. If you want to enjoy the basic story, watch the film. I’d give it 2 of 5.

Still want to read it? Trade for it on Swaptree or Buy it on Amazon

* The Devil Wears Prada is apparently a roman a clef about the author’s time working for Conde Nast. It is thinly veiled.

4 responses to “The Devil Wears Prada”