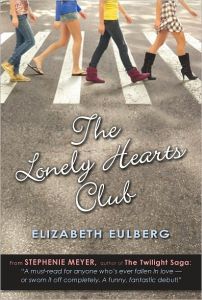 I never did like the Beatles. Or rather, I may have liked them once, before I heard their music so much that it started to drive me a little crazy. When you live in a town with three radio stations (one was country except on Sundays when it was latin, one was classic rock except on Sundays when it turned into Beatles, and one was NPR) you end up hearing the Beatles so much that you get a lifetime’s worth in a few years. Regardless of my feelings for the Beatles, I did enjoy the premise of this book. I say premise, because there are some very, very large plot holes and points which should not have been glossed over.

Penny Lane Bloom was five years old when she decided she was going to marry Nate. They spent summers together, grew up together, and were best friends. The summer before her Junior year of High School is when it all changed. Nate was “sexy,” and interested in more than the innocent kissing which Penny was comfortable with. The night Penny decides to have sex with Nate in order to “keep” him, she walks in on him with another girl, breaking her heart and convincing her that boys are evil.

Penny is the youngest daughter of Beatles fanatics, and grew up surrounded by Beatles music and paraphernalia, so it’s hardly surprising that she turns to the Beatles for comfort. She creates the “Lonely Hearts Club,” a sort of support group for teenage girls. The rules for the club are:

Violators of the rules are subject to membership disqualification, public humiliation, vicious rumors, and possible beheading. (I loved this bit, it sounds like something I would write.)

Penny finds her first member in the form of her ex-best-friend Diane, who (having just broken up with Ryan) is trying to find herself again, after losing her identity as “Ryan’s Girlfriend.”* Penny’s current best-friend Tracy also joins in, and from there the club keeps growing. Todd and Ryan both spend a lot of time flirting with Penny (and complicating matters). The club grows, as does the drama surrounding it, which is where I really start to have a problem with some plot points.

1) Penny: We never get a physical description of her, except that she’s “hawt,” she eats anything and stays thin, has a thoughtless funky style, and she has big enough boobs to get guys looking. We know nothing of her appearance. Sure, this is a first-person novel, but something about her besides boobs would be good.

2) Penny’s friend Kara the Anorexic: “Kara shifted uncomfortably and fiddled with her apple as the rest of us dove into our lunches. It was hard not to notice the fact that she had lost even more weight over the summer — if that was even possible…” (34). Kara then disappears for a few chapters, showing up around page 90 or so before disappearing again. She turns up to join the club after the Homecoming dance, and she gets a lot of mentions, but not a lot of lines. She vanishes again, and gets mentioned on page 208 when Tracy tells Penny that she’s going to counseling for the eating disorder that her best friends seemingly never noticed.

4) Principal Braddock: He used to be a football star, and created his advisory committee to keep track of things, and to reminisce about his high school days. He calls Penny & her Parents in to discuss his problem: “Dr. and Mrs. Bloom, the problem is that Penny is using her unfortunate experiences to turn the rest of the female population against the males at this school” (189). Why the hell would a principal care? He then stops the girls basketball team from having their fund-raiser on school grounds because it’s “Lonely Hearts Club Event,” which would mean it can’t be on school property. I find this to be weak. And the drama with Braddock is never really resolved.

Aside from those bits, it’s not a bad book though, and I did like it.

The prose is strong, the premise is good, but there’s some major plot issues for me. Kara especially feels botched; there’s no real motivation for her to suddenly want help with  her eating disorder. I’m glad she gets it, but she feels like she was thrown in to help examine more issues, rather than being herself. I do like the idea that girls need to learn to be, and to love themselves. I also love that Penny is a strong narrator, who seems like she’s got some real emotions and thoughts going on. It gets a 3.5/5 for being enjoyable, but needing a bit more polish. I think Elizabeth Eulberg will continue to grow, and she does have a talent with her narrators, so I hope to read a bit more of her stuff evenually.

* This particular aspect struck a chord with me; I was the girl who became the football player’s girlfriend, who was friends with his friends because of him, who lost track of her current friends, and who had to re-find herself after the relationship ended. I was a bit lost, and I was lucky enough to find that my friends were willing to forgive me, and that I did actually like myself.

This book is part of the Local Library Reading Challenge!