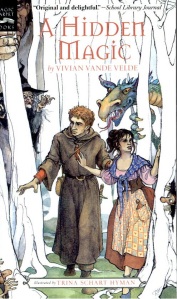 We got a lot of new books at work, and this was one of many that I grabbed off the shelf. I expected a few laughs, and some silliness, and this book delivered. It’s certainly not deep, and it was a quick read.* It’s funny in the same way that The Enchanted Forest Chronicles is funny; an Improper Princess goes on an adventure and picks up a sidekick along the way.

Once upon a time– before kings and queens were replaced by an act of Congress and when kissing a frog still sometimes resulted in more than a case of warts– there lived a young princess named Jennifer.

Now Jennifer was not your average beautiful princess living in a magnificent palace. In fact, she was actually rather plain and shy, with the chubby, good-natured kind of face parents tend to call nice… (1)

Jennifer is your standard Improper Princess, who unfortunately falls for a very pretty Handsome Prince. Of course, he’s incredibly selfish and self-centered, and when he encounters Jennifer as she does the laundry, he doesn’t even help her carry it. (Though, because he is so handsome, Jennifer doesn’t seem to mind.)

Unfortunately, Jennifer is so besotted with the handsome prince that she doesn’t realize he’s an idiot, so when he suggests that they go into an enchanted forest, she agrees. It’s no surprise that they get lost, and is even less surprising that when they find a cottage, prince Alexander gets bespelled. (By a mirror, because he can’t help staring into it, and then tries to steal it.) Unlike Alexander, Jennifer has a bit of common sense, and goes to find some help.

The first person Jennifer comes across in her exploration of the wood is the Old Witch, who lives in a cave and talks to her magic pool. Things don’t go quite right, and everyone else Jennifer meets is just as odd as the Old Witch. Eventually, because this is fairy-tale based, prince Alexander is saved, and everyone lives happily ever after.

A Hidden Magic is a lighthearted fantasy adventure for kids. The story is well-written, and fun. The pacing is good, and it keeps going along without being too fast. If it were targeted at an older group (than elementary school), it would be a little sparse, but for beginning readers who want chapter books and fun stories, this book is ideal. (It also manages to stay interesting for adult readers) It gets a 4/5.

* I’m a pretty fast reader, so I finished it in a little over an hour. I think most adult readers could tear through it in 3 or less hours.

You only have until tomorrow to enter, if you’re intere

sted in a free book! I’ll be deciding the winner tomorrow (July 30th) at about 9pm PST, so be sure you comment by then! (I’ll even waive the haiku/limerick requirement, if you find it intimidating, or are hesitating because of that.)