The Chronicles of Chrestomanci 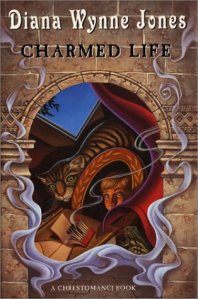 Ok, so in reality this is part 1 of the Omnibus edition of The Chronicles of Chrestomanci Volume 1, but in an effort to keep my reviews of a manageable length, I’m breaking the volume up into individual stories. (There are only 2, and they’re each at least 200 pages, so I feel justified in this.) Besides, it took me two full days to read this (in part because I’m working so many hours) so if I were to wait until I’ve read the entire volume, I’d never get the review up.

Gwendolen is all the family Cat has left after a boating accident kills their parents. Because there is nobody else, Cat clings desperately to his older sister, to the point that he has no real identity of his own. He’s the prodigy’s younger brother, the boy who survives by clinging to Gwendolen.

Meanwhile, Gwendolen has aspirations. She’s outgrown their little street, and believes that it’s time that their distant relation, Chrestomanci, takes them in. She writes him a letter, and convinces him to bring them into his home.

Cat doesn’t really know what to make of life in Chrestomanci’s home; Millie immediately makes them welcome, but he doesn’t quite know what to expect from Julia and Roger. Chrestomanci refuses to allow Gwendolen to learn advanced magic, instead insisting that she must first get an elementary education before starting over at beginning magic. She is furious, and spends quite a bit of time getting attention, until she finally angers Chrestomanci to the point that he takes away her magic, which is when everything gets really crazy.

The Chronicles of Chrestomanci have a special spot in my heart, because I have read it several times. I’ve owned several copies and editions of most of these stories (at least 2 or 3 copies of the omnibus edition, for example). It’s an excellent descent into a well thought-out world, which is controlled by beautiful prose and strong characterization. It’s also a bit of a page-turner, even when you sort of remember what’s coming next. It gets a 5/5.

On an aside, I really love the way the universe is introduced in the forward-thing:

There are thousands of worlds, all different from ours. Chrestomanci’s world is the one next door to us, and the difference here is that magic is as common as music is with us. It is full of people working magic– warlocks, witches, thaumaturges, sorcerers, fakirs, conjurors, hexers, magicians, mages, shamans, divinsers and many more– from the lowest Certified witch right up to the most powerful enchanters. Enchanters are strange as well as powerful. Their magic is different and stronger and many of them have more than one life.

Now, if someone did not control all these busy magic-users, ordinary people would have a horrible time and probably end up as slaves. So the government appoints the very strongest enchanter there is to make sure no one misuses magic. This enchanter has nine lives and is known as “the Chrestomanci.” You pronounce it KREST-OH-MAN-SEE. He has to have a strong personality as well as strong magic.

The universes of the Magids does not seem so very different from the worlds of Chrestomanci, and I think it would be interesting if they ever overlapped.