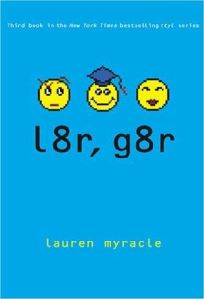 Every year I tell myself that I’ll do something interesting, something meaningful, something special to mark the passing of a week which is 50% anger and 50% amusement for me. On the one hand, people are idiots, banning books because they don’t like them. On the other hand, people are hilarious, thinking that anyone else will listen to them.

So I’d like to take just a brief moment to mention that banned books week is upon us. The top 10 most challenged books of 2009 were:

8. The Earth, My Butt, and Other Big, Round Things, by Carolyn Mackler
Reasons: Sexually Explicit, Offensive Language, Unsuited to Age Group

Have any of you read these? Are you going to read any of them now that you know they’re on this list?

I’m going to be picking up at least a few of these– most notably the ones I have not yet read. (I will not read The Color Purple again. Once was enough.)

Also, we need to let children set their own curve. When I was 8, I was ready for some more grown up books than could be found in the children’s section. This does not mean that all 8 year-olds are ready, and it does not mean that no other 8-year olds are. It means that children mature in different ways at different speeds.

Filed under Not a Book Review

Tagged as Banned Books Week, not a book review