I was participating in The Neverending Shelf‘s Secret Santa, and was lucky enough to get two books I’ve always wanted to own: 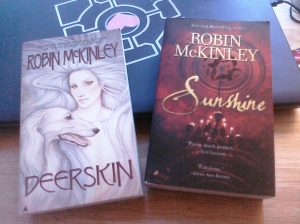 It seems my lovely partner was Michelle of Hooked to Books.

Thanks, Michelle! I can’t wait to read these!

Filed under Not a Book Review

Tagged as not a book review 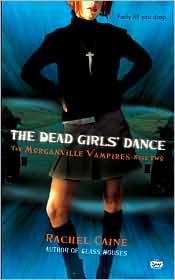 From the Back Cover

Claire Danvers has her share of challenges– like being a genius in a school that favors beauty over brains, dealing with the homicidal girls in her dorm, and above all, finding out that her college town is overrun with vampires. On the up side, she has a great roommate (who tends to disappear at sunup) and a new boyfriend named Shane… whose vampire-hunting dad has called in backup: cycle punks who like the idea of killing just about anything.

Now a fraternity is throwing its annual Dead Girls’ Dance and– surprise!– Claire and her equally outcast best friend, Eve, have been invited. When they find out why, all hell is going to break loose. Because this time both the living and the dead are coming out– and everybody’s hungry for blood.

It didn’t happen, Claire told herself. It’s a bad dream, just another bad dream. You’ll wake up and it’ll be gone like fog…

I was warned that book 1 was a cliffhanger, so I had book 2 at hand to continue. I would advise doing the same, should you choose to read it.

The story definitely shifts a bit from volume 1 to volume 2. There is some major violence, and quite a bit of angst and drama in this volume, which works well, considering the storyline. Things start to get more involved, and the end result is a story which keeps drawing you in, making you want to know even more than Glass Houses told.

Things are complicated by the fact that the vampires aren’t very happy with the residents of Glass House. None of them are safe, and it’s a difficult thing to read about. There aren’t any strong females, and none of them rise to the challenge. There is a moment of potential gang-rape, and I was unimpressed by the character’s inability to help herself at all.

There is a complete story arc here, but it’s clear that there is much, much more to come.