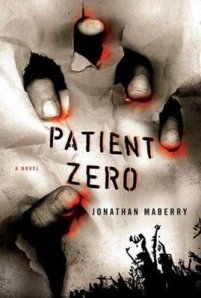 This post is long-overdue. When I read Rot & Ruin, I was thrilled. I’d found a zombie book which was also about humanity. I had to find out if the author had more in him, so I went out of my way to pick up Patient Zero from the library. I devoured it in a little under a day, and spent a little over an hour gushing about the pair of them to my mother, who has now decided that she needs to read it. And then, life happened.

I got sucked-in to a writing project– yes, I also do creative writing– and a few old forums that I haven’t been on in ages. I got extra hours at work, I’ve been on a fierce job-hunt, and reading has really fallen by the wayside. I am attempting to get myself back on track, which will likely happen as a direct result of me setting myself a posting-schedule.

When you have to kill the same terrorist twice in one week there’s either something wrong with your world or something wrong with your skills… and there’s nothing wrong with Joe Ledger’s skills.  And that’s both a good, and a bad thing.  It’s good because he’s a Baltimore detective that has just been secretly recruited by the government to lead a new taskforce created to deal with the problems that Homeland Security can’t handle. This rapid response group is called the Department of Military Sciences or the DMS for short. It’s bad because his first mission is to help stop a group of terrorists from releasing a dreadful bio-weapon that can turn ordinary people into zombies. The fate of the world hangs in the balance…

And there’s nothing wrong with my skills.

Joe Ledger is like a hard candy- he’s hard on the outside, and totally delicious. Wait, no. He is a good guy though, you get that impression from the beginning; he’s tough, well trained, and strong, but he’s not too hardened to care. He’s the sort of guy you want on your team, and not on anyone else’s. At times, however, he can feel a little too great at what he does. He’s faster and stronger than any other guy out there, which verges on unbelievable when you consider that he is surrounded by the best-of-the-best.

Our villains are truly maniacal, which makes it even more fun to see where they are going with their evil schemes, and keeps you enthralled, waiting for more knowledge.

Chapters alternate at-need; Joe is the only one from first person. The time line is a little fuzzy, but the gist of it falls together alright. A lot of things happen in very little time, jumping back and forth between “now” and “six days ago” and more recently.

I really liked this book, and have already ordered the sequel via the library; it’s worth the read. There are also companion novellas which seem worth reading, too.

This particular story gets a 4/5– it was great, but not perfect.