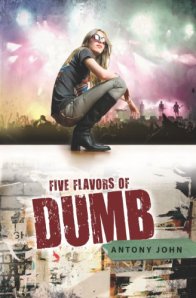 When I read Erin’s review over at LitSnit, she made this book sound super interesting, so I looked for it at my library to no avail. But a few weeks later, I noticed it in the “newly input” list, and I jumped right on that. Hooray for librarians who track search terms!

Eighteen-year-old Piper has gotten herself into a mess. Because of her big mouth, she has one month to get a paying gig for her high school’s hottest new rock band, called Dumb. In Piper’s mind, the band couldn’t have a more perfect name. Just look at the members: one egomaniacal pretty boy, one silent rocker, one talentless piece of eye candy, one angry girl, and one nerd-boy drummer– five discordant personalities who, when put together, seem ready to self-destruct at any moment. Getting them an actual gig seems impossible. Add to that the fact that piper doesn’t know if their music is good or not, because, well, she’s deaf.

But Piper is determined to get the band a gig to show her classmates that being deaf doesn’t mean she’s invisible. And as she gets to know the five flavors of Dumb, some hidden talents, secret crushes, and crazy rock music emerge. She doesn’t need to hear the music to sell it, but Piper wants the chance to feel the music too. Does she have what it takes to manage Dumb and discover her own inner rock star?

For the record, I wasn’t around the day they decided to become Dumb. If I’d been their manager back then I’d have pointed out that the name, while accurate, was not exactly smart. It just encouraged people to question the band’s intelligence, maybe even their sanity. And the way I saw it, Dumb didn’t have much of either.

Piper is strong, and sassy, and determined, and everything you hope for in a teenage, female protagonist. She wasn’t born deaf, but she lost most of her hearing when she was a child. She can lip-read like a pro, and she doesn’t consider her deafness to be a weakness, or a disability. Instead, it’s just one more facet of her being. I loved her to pieces, and felt like the rest of the story didn’t matter, because she was the best thing about it.

That said, the rest of the story was pretty fantastic, too. There’s a lot going on here, as Piper’s family adjusts to the deafness of her baby sister– Grace– and the cochlear implants which they have gotten for her. Aside from dubious funding choices, there is a significant impact upon Piper; she envies her baby sister. This is the catalyst, but is not the only source of familial conflict, which is yet another complication to Piper’s life.

There’s also the numerous secret and not-so-secret crushes. Some of them are more immediately obvious than others. I think most of them are fairly adorable.

Ed was perhaps my favorite character besides Piper. Marissa might have been one of my least favorite, because she was so very useless. Even the “bad” people are useful, except for her.

That said, it was a great book with excellent pacing and little fat which could have been trimmed. It’s earned an un-reserved 5/5 for being fantastic.

2 responses to “Five Flavors of Dumb”