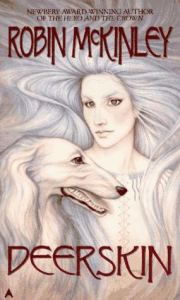 Warning: This book deals with rape an other “adult” themes.

As Princess Lissar reaches womanhood, it is clear to all the kingdom that in her breathtaking beauty she is the mirror image of her mother, the queen. But this seeming blessing forces her to flee for safety from her father’s wrath. With her loyal dog Ash at her side, Lissar unlocks a door to a world of magic, where she finds the key to her survival– and an adventure beyond her wildest dreams…

Many years later she remembered how her parents had looked to her when she was a small child: her father as tall as a tree, and merry and bright and golden, with her beautiful black-haired mother at his side. She saw them, remembered them, as if she were looking at a painting; they were too splendid to be real, and always they seemed at some little distance from her, from all onlookers. They were always standing close together as she remembered them, often gazing into each other’s eyes, often handclasped, often smiling; and always there was a radiance like sunlight flung around them.

I would class Deerskin as a difficult read. It requires a certain maturity, and a certain mindset to get through it. It deals with rape– it is vivid, though not explicit– and long-lasting aftermath and emotional scars. It is not a book for young readers, or people looking for a light read. I feel the need to preface it this way, because I feel like if you’re going to read a book with sexual violence, you should be prepared for it. I have denounced books before for using rape as a plot device, but that is for using it lightly. It is not used lightly here.

Occasionally, I feel compelled to re-read Deerskin, knowing that I have trouble with the first part of the book, because it is still a good book. It is not one which I read lightly. As odd as it sounds, it can be comforting when you’re miserable to read about someone who is more miserable than you. When I first encountered Deerskin, it was during one of the worst periods of my life, and reading about Lissar and her healing helped me. Now I re-read it because it reminds me how much better things are now.

I cannot say that I suggest it, precisely. Especially if you’re a McKinley fan, because it is both like and unlike her other books. There is a nod to Aerin and Maur, and in many ways the prose is the same style, but the subject matter is distinctly different.  It is based on Charles Perrault’s Donkeyskin, which is a creepy enough fairy tale without adding violence.

As much as it may not sound like I enjoy it, I do like this book to re-read it. Lissar is a difficult character to empathize with, because of her circumstances, but also because of her emotional damage. She doesn’t remember much, which is a difficult conceit to pull off without being soap-opera-y, but it’s done well, here. Chapter seventeen is where I typically start enjoying the book, because it shifts focus a bit.

I do have a bit of trouble with the climactic scene. It’s over-the-top, and I don’t particularly enjoy that. I can’t say a lot more without spoiling it, but I can’t maintain my suspension of disbelief, because it’s too awkward. Add to that a rather stilted denouement, and it’s not wholly satisfying. The after is what I am most interested by, when I think about this particular title.

When all is said and done, I’d give this a solid 4/5. I re-read it, and I enjoy reading it, though it is a bit heavy for my typical taste.

If you choose to buy this book, please consider doing so via this link. It gets me referral credit with amazon associates.