Seduced by the Wolf

Heart of the Wolf: Book Five** 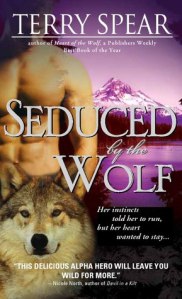 Cassie Roux is a wolf biologist who has studied real wolves for years, trying to prove to the world they’re not the evil predators so many people believe them to be. A red lupus garou, who lost her pack and was raised by real wolves, she has dedicated her life to their preservation. Now for the first time, she discovers a female wolf, her mate dead, and the pups and the mother in real danger, and Cassie does everything she can think of to protect them. Until she runs into one stubborn alpha pack leader—werewolf kind—who has other plans for her.

Leidolf Wildhaven is a red lupus garou pack leader of Portland, Oregon and has more troubles than he ever thought possible what with running a pack, a ranch and other businesses, dealing with a couple of cantankerous new lupus garous, and a myriad of other problems when a little red wolf of the lupus garou variety is spotted in his territory. She’d be perfect as his mate, if she agreed. Only the headstrong woman has other priorities, saving real wolves from extinction, when he’s more worried about his own kind’s extinction and winning her heart.

Except for a couple of cars parked outside the town hall, the lot was empty, and it appeared the wolf biologist speaking here tonight wouldn’t have much of an audience to lecture to.

The Oregon air surrounding him felt damp and cool, not like the drier, much sunnier weather Leidolf Wildhaven had left behind in Colorado. He kept telling himself he’d get used to it.

I was hoping for something… simple. Something which I could read without going “huh?” or trying to figure out who the “bad guy” is. That’s a good thing, because the plot in this book is fairly transparent, and you can tell who the “bad guy” is fairly early on. It’s just a matter of waiting for the characters to catch up. The non-romantic plot is similar to a scooby-doo chase scene; sometimes the good guys are chasing the bad guys, and sometimes it’s the other way around, but they never quite catch one another.

Their biggest hurdle is Cassie’s past, and her inability/unwillingness to commit to anyone. She’s been hurt before, and is afraid that forming attachments will get her hurt again, rather than helping to heal her. She’s as attracted to Leidolf as he is to her, but she resists. She doesn’t want to be part of a pack, and she’s afraid of what being Leidolf’s mate will entail.

However, Leidolf’s been looking for a mate, and Cassie seems to be perfect for the position. She’s smart, beautiful, and a red loups garou, just like him. It doesn’t matter if she’s recently changed, and a loner without a pack, he wants her just as she is, and his biggest hurdle will be convincing her she’s as perfect for him as he knows she is.

There is one more aspect to this; a couple unknown villains are attempting to kill a female red-wolf, and Cassie seems to have become their target. But there’s more to this than what initially meets the eye. Leidolf and Cassie need to get to the bottom of it before one of them ends up dead.

As far as story goes, I was entertained. I read it in about four hours, though it wasn’t the compulsive-reading which happens sometimes. I liked it enough, actually, that I’ve bought other books in the series. It’s roughly a 4/5; it was good, and I had fun reading it.

Interested in reading it now that you’ve read my review? Do me a favor and buy Seduced by the Wolf

with this link, or if you’d like to start at the beginning, try Heart of the Wolf

Using these links gets me credit with amazon associates.

* I read the ebook version, so I’m trusting amazon to have the page count right. Also, the kindle edition is only $5.24, but I think I got it when it was free.

** I jumped in with this book first, and I can’t yet say whether it’s got detrimental effects on my reading. I don’t think it’s particularly entwined with other books from the series, though it does have some relationship.