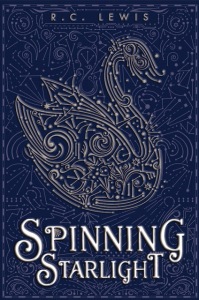 Sixteen-year-old heiress and paparazzi darling Liddi Jantzen hates the spotlight. But as the only daughter in the most powerful tech family in the galaxy, it’s hard to escape it. So when a group of men show up at her house uninvited, she assumes it’s just the usual media-grubs. That is, until shots are fired.

Liddi escapes, only to be pulled into an interplanetary conspiracy more complex than she ever could have imagined. Her older brothers have been caught as well, trapped in the conduits between the planets. And when their captor implants a device in Liddi’s vocal cords to monitor her speech, their lives are in her hands: One word and her brothers are dead.

Desperate to save her family from a desolate future, Liddi travels to another world, where she meets the one person who might have the skills to help her bring her eight brothers home-a handsome dignitary named Tiav. But without her voice, Liddi must use every bit of her strength and wit to convince Tiav that her mission is true. With the tenuous balance of the planets deeply intertwined with her brothers’ survival, just how much is Liddi willing to sacrifice to bring them back?

Haunting and mesmerizing, this retelling of Hans Christian Andersen’sThe Wild Swans strings the heart of the classic with a stunning, imaginative world as a star-crossed family fights for survival in this companion to Stitching Snow.

After sixteen years, you think I’d be used to the incessant buzz of vid-cams swarming to chronicle every breath I take. I’m not. Good thing, too, or I might not have noticed when one of the tiny airbourne devices slips into the hovercar with me like an errant bumblebee.

I first read Stitching Snow (review to follow) because the cover was pretty. I ended up loving it. So when I saw that the author was writing another book, I preordered it. And then, though I periodically checked in on it, mostly forgot.

Until I got an email from Amazon telling me that the book I had been waiting for was ready for download to my kindle. I was super excited, but didn’t get a chance to read it for a few more days. Then when I started, I didn’t want to put it down. I tore through it pretty quickly,

It started on my train ride, and ended with me avoiding social obligations to finish it. All told, it only took me a couple hours to read it, but man did I enjoy those hours.

Liddi is a really interesting heroine. She’s forced into the spotlight by virtue of her family, and plays a part because it’s all she feels she can do. Her brothers were all prodigies, and debuted technological marvels at young ages. She has not, and feels as though she has failed to live up to expectations. But when the pressure is on, she rises to the task, and faces possibly world-ending challenges head-on.

She does the right thing even when it’s hard, and that is pretty impressive.

There are flashbacks throughout the book, snippets from Liddi’s past, largely focusing around her relationship with her brothers. It helps to show the depth of feeling between the siblings in the Jantzen family.

There are spots in the plot that slow down in the middle, but that’s not entirely a bad thing. It gives you a chance to catch up.

The world is wildly different from our own, and there are spots where perhaps it could have benefited from a little more depth. But overall, there’s enough of the world to tell the story, and it’s interesting enough that you will want more for the sake of the book.

I’d recommend both books by RC Lewis to anyone who enjoys YA Sci-Fi. It gets a 4.5/5/