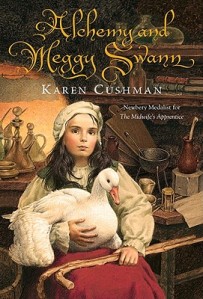 Margaret Swann has never been a normal girl. Deformed since birth, she has been treated as an outcast, as a tainted soul, cursed by a demon while still in the womb. She’s called “witch” or other more awful names. When Meggy leaves her small town for London, there is no love lost between herself and those she is leaving behind. Despite that, she almost immediately wants to go home, back to her mother’s alehouse, back to what is familiar, if not welcoming.

In London, she is told she has been “summoned” by a man Meggy only knows as “Master Peevish.” It is revealed to her that Master Peevish is an Alchemist, that he expected an able-bodied boy, not a crippled girl, and that he is her father. Her relationship to her father is distant– he never knew anything about her, having been too absorbed in his “science” to stay at a small alehouse in a small town. When he realizes that Meggy’s legs will stop her from being the ideal servant, he ignores her. There is little to say about Meggy and her father, and what there is to say should be read about, rather than spoiled here.

Because people from Meggy’s old village were superstitious, and fell into the category of “cripples were cursed by the devil,” she has never really had friends. The one exception to this is Louise, her pet goose, who was also crippled in a way. Unfortunately, one of the first things Louise does in London is annoy Master Peevish, so Meggy must re-home her only friend. With some help from Roger (her father’s ex-servant/apprentice) Meggy manages to find a place for Louise where nobody will eat her.*

Then, Meggy must learn to make her own way in London. Roger has always been friendly to her, but he is busy now, working with an troupe of players. The cooper next-door is kind, but has his own problems to worry about. There are many other people that Meggy meets while running errands for her father, or trying to fill her stomach. Through her adventuring, she figures out that people can be kind, and that she, herself is kind sometimes.

There are more life-lessons for Meggy before the book is through. Things happen which make her realize that she is strong, despite her disability, and that she can make her own fate instead of having it made for her. Like Cushman’s other heroines, Meggy is a strong girl, and she does alright, in the end.

Meggy is the sort of heroine you’re rooting for, despite her being a bit of a jerk in the beginning. She softens, over time, as she realizes that not everyone hates her. The language is a bit dense at times, but if you just keep going, you adjust, (much like Scones and Sensibility) and by the end the language feels natural. There’s a bit of a blurb at the back about the history included in the story, which crams a bit of extra education in there.

Overall, I feel like this was a good book, though I definitely prefer some of Cushman’s other titles a bit more. It scores a 3.5/5– I liked it, but I’m not going to be rushing out to buy my own copy any time soon.

* When I was a kid, my parents got me one bunny. But, they thought, the bunny might be lonely. We’ll get him a friend! Which might have been fine, if the bunnies hadn’t then err… bred like rabbits. We went from one, to two, to five, to thirteen or fourteen at the peak. I gave away bunnies to anyone who would take them if they would promise to never eat it. Of all the animals I’ve kept as pets, chickens are the only ones I’ll eat, because they were dumb and smelly and annoying. Bunnies are soft and snuggly and friendly, and the idea of eating one freaks me out.