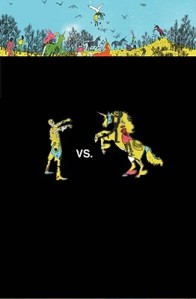 The thing which actually made me want to read this anthology was Diana Peterfreund’s addition “The Care and Feeding of your Baby Killer Unicorn,” which is set in the same universe as Rampant. However, I am glad I took the time to read this, since I enjoyed almost every story in the book (at least on some level.)

The offerings are mixed, but are all labeled as either “Team Zombie” or “Team Unicorn,” with only one (I think) that has both zombies and unicorns. Additionally, the top corners of the pages are also marked by either a Zombie or Unicorn logo, making quick-scans for specific stories easy. A few of them were sweet, one or two romantic, and a couple actually bleak. I’m glad I took the time to read this, though.