Four decades of peace have done little to ease the mistrust between humans and dragons in the kingdom of Goredd. Folding themselves into human shape, dragons attend court as ambassadors, and lend their rational, mathematical minds to universities as scholars and teachers. As the treaty’s anniversary draws near, however, tensions are high.

Seraphina Dombegh has reason to fear both sides. An unusually gifted musician, she joins the court just as a member of the royal family is murdered—in suspiciously draconian fashion. Seraphina is drawn into the investigation, partnering with the captain of the Queen’s Guard, the dangerously perceptive Prince Lucian Kiggs. While they begin to uncover hints of a sinister plot to destroy the peace, Seraphina struggles to protect her own secret, the secret behind her musical gift, one so terrible that its discovery could mean her very life.

I remember being born.

In fact, I remember a time before that. There was no light, but there was music: joints creaking, blood rushing, the heart’s staccato lullaby, a rich symphony of indigestion. Sound enfolded me, and I was safe.

END_OF_DOCUMENT_TOKEN_TO_BE_REPLACED

Please be aware that because this is the second book in a series, there may be spoilers for the first book, White Cat. Proceed with caution.

Also included in this post, my opinion on “Lila Zacharov in 13 Pieces,” which was a teaser to bridge the gap between White Cat and Red Glove. (I loved it.)

Curses and cons. Magic and the mob. In Cassel Sharpe’s world, they go together. Cassel always thought he was an ordinary guy, until he realized his memories were being manipulated by his brothers. Now he knows the truth—he’s the most powerful curse worker around. A touch of his hand can transform anything—or anyone—into something else.

That was how Lila, the girl he loved, became a white cat. Cassel was tricked into thinking he killed her, when actually he tried to save her. Now that she’s human again, he should be overjoyed. Trouble is, Lila’s been cursed to love him, a little gift from his emotion worker mom. And if Lila’s love is as phony as Cassel’s made-up memories, then he can’t believe anything she says or does.

When Cassel’s oldest brother is murdered, the Feds recruit Cassel to help make sense of the only clue—crime-scene images of a woman in red gloves. But the mob is after Cassel too—they know how valuable he could be to them. Cassel is going to have to stay one step ahead of both sides just to survive. But where can he turn when he can’t trust anyone—least of all, himself?

Love is a curse and the con is the only answer in a game too dangerous to lose.

I don’t know whether it’s day or night when the girl gets up to leave. Her minnow silver dress swishes against the tops of her thighs like Christmas tinsel as she opens the hotel door.

I struggle to remember her name.

“So you’ll tell your father at the consulate about me?” Her lipstick is smeared across her cheek. I should tell her to fix it, but my self-loathing is so great that I hate her along with myself.

END_OF_DOCUMENT_TOKEN_TO_BE_REPLACED

Seduced by the Wolf

Heart of the Wolf: Book Five**

Cassie Roux is a wolf biologist who has studied real wolves for years, trying to prove to the world they’re not the evil predators so many people believe them to be. A red lupus garou, who lost her pack and was raised by real wolves, she has dedicated her life to their preservation. Now for the first time, she discovers a female wolf, her mate dead, and the pups and the mother in real danger, and Cassie does everything she can think of to protect them. Until she runs into one stubborn alpha pack leader—werewolf kind—who has other plans for her.

Leidolf Wildhaven is a red lupus garou pack leader of Portland, Oregon and has more troubles than he ever thought possible what with running a pack, a ranch and other businesses, dealing with a couple of cantankerous new lupus garous, and a myriad of other problems when a little red wolf of the lupus garou variety is spotted in his territory. She’d be perfect as his mate, if she agreed. Only the headstrong woman has other priorities, saving real wolves from extinction, when he’s more worried about his own kind’s extinction and winning her heart.

Except for a couple of cars parked outside the town hall, the lot was empty, and it appeared the wolf biologist speaking here tonight wouldn’t have much of an audience to lecture to.

The Oregon air surrounding him felt damp and cool, not like the drier, much sunnier weather Leidolf Wildhaven had left behind in Colorado. He kept telling himself he’d get used to it.

END_OF_DOCUMENT_TOKEN_TO_BE_REPLACED 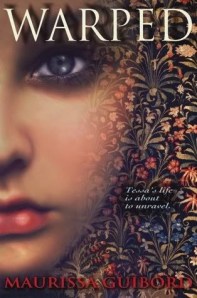 Tessa doesn’t believe in magic. Or Fate. But there’s something weird about the dusty unicorn tapestry she discovers in a box of old books. She finds the creature woven within it compelling and frightening. After the tapestry comes into her possession, Tessa experiences dreams of the past and scenes from a brutal hunt that she herself participated in. When she accidentally pulls a thread from the tapestry, Tessa releases a terrible centuries old secret. She also meets William de Chaucy, an irresistible 16th-century nobleman. His fate is as inextricably tied to the tapestry as Tessa’s own. Together, they must correct the wrongs of the past. But then the Fates step in, making a tangled mess of Tessa’s life. Now everyone she loves will be destroyed unless Tessa does their bidding and defeats a cruel and crafty ancient enemy.

Cheever’s Fine Auction House was packed on a stormy spring afternoon. The auctioneer’s voice carried over the patter of rain drumming on the high, dark-beamed roof of the former dairy barn. “Number ninety-four. Last lot,” he announced to the crowd.

“Thank God,” said Tessa Brody under her breath. She’d been sitting there so long, she’d probably have an impression of the chair slats engraved on her rear end. Auction butt. Not good.

END_OF_DOCUMENT_TOKEN_TO_BE_REPLACED

A Tale of Two Castles

Ella Enchanted was one of my favorite childhood books. My mom gave it to me for Christmas in 1998– she’s big on writing dates in books which are gifts– and I’ve read it so many times that a few pages are loose, the spine is falling to pieces, and it’s stained all over. I’ve got an abiding love for Gail Carson Levine, in part because of Ella Enchanted, and in part because she’s got a knack for writing magical stories which children are guaranteed to love.

Twelve year-old Elodie has just set out on her first adventure, and her first step toward adulthood. It is time for her to head to Two Castles and become an apprentice, though she cannot afford a short apprenticeship, so she must commit to the 10-year “free” term. Despite her parent’s wishes– that she apprentice to a weaver, Elodie seeks out an apprenticeship with the Two Castles mansioners.

Things don’t go according to plan, and Elodie soon finds herself working for the dragon Meenore and brushing up on her skills of “deduction, induction, and common sense.” But something is wrong in Two Castles, and Elodie’s job will not be as easy as it first seemed.

Mother wiped her eyes on her sleeve and held me tight. I wept onto her shoulder. She released me while I went on weeping. A tear slipped into the strait through a crack in the wooden dock. Salt water to salt water, a drop of me in the brine that would separate me from home.

Father’s eyes were red. He pulled me into a hug, too. Albin stood to the side a few feet and blew his nose with a honk. He could blow his nose a dozen ways. A hong was the saddest.

END_OF_DOCUMENT_TOKEN_TO_BE_REPLACED

Tortall and Other Lands (Anthology)

I pre-ordered this book as soon as I heard it was being written. Then, the day I got it, I tore through it. Way too much fun to read this particular anthology. It was made even more bittersweet by the fact that it had a teaser for Mastiff in the back.

For Pierce fans, there are a few old, familiar characters. You might remember Aly and Nawat (Trickster’s Choice & Trickster’s Queen) and Daine & Numair (Wild Magic, Wolf Speaker, etc.)*. There are cameos of characters who you might not remember at first, because they weren’t huge, but they were cool.

So, onto brief summaries and story-specific comments. I’ll try to keep them spoiler-free.

END_OF_DOCUMENT_TOKEN_TO_BE_REPLACED

Evelyn Harbinger sees nothing wrong with a one-night stand. At 149 years old, Eve may look like she bakes oatmeal cookies in the afternoon and dozes in her rocking chair in the evening, but once the gray hair and wrinkles are traded for jet-black tresses and porcelain skin, she can still turn heads as the beautiful girl she once was. Can’t fault a girl for having a little fun, can you?

This is all fine and well until Eve meets Justin, who reminds her so much of a former lover that one night is no longer enough. Eve’s coven has always turned a blind eye to her nighttime mischief, but this time they think she’s gone too far– and they certainly don’t hesitate to tell her so. Dodging the warnings of family and friends, Eve must also defend her sister, Helena, when another beldame accuses Helena of killing her own husband sixty years previously.

As the evidence against Helena begins to pile up, Eve distracts herself by spending more and more nights– and days– romancing Justin as her former self. There are so many peculiar ways in which Justin is like Jonah, her partner behind enemy lines in World War II and the one true love of her life. Experts in espionage, Jonah and Eve advanced the Allied cause at great personal sacrifice. Now Eve suspects that her Jonah has returned to her, and despite the disapproval of her coven and the knowledge that love with a mortal man can only end in sorrow, she can’t give him up. But can she prove it’s really him?