Mankind has caused the ice caps (or at least most of them) to melt and raise the water levels, in most cases, far more than was ever predicted. As a result, many cities were lost, and much technology is gone. There are two groups remaining; the rich and the poor. The rich are ultra-rich, living on clipper-ships (which are like yachts, but nicer) and controlling the fate of the poor, whether or not they are aware of it. The poor, meanwhile struggle to get by, working at whatever jobs they can find, and dreaming of a better life.

On the beaches of a greatly-expanded Gulf Coast, Nailer works as part of a scavenge crew, breaking down ancient oil tankers for scrap. Specifically, Nailer works on light-crew; the group of youths who are small enough to fit into the ducts and reclaim copper wire*. It is dangerous, dirty work with a high mortality rate, and every time Nailer crawls into the ducts, he hopes it won’t be his last. He dreams of a bit of luck, and hopes for a day when he won’t have to work on the ships to survive.

END_OF_DOCUMENT_TOKEN_TO_BE_REPLACED 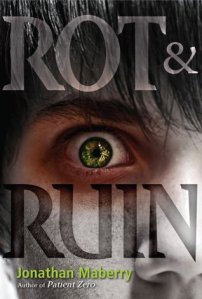 Don’t let the cover put you off. It’s a creepy book, at times, but not as creepy as the eyeball seems to suggest.

Benny Imura has only vague memories of the night his parents died. What he does remember paints a bleak picture; his father was a zombie, his mother facing imminent death, and his brother was the coward who took him and ran, leaving their parents behind. Despite what everyone seems to think about Tom Imura, Benny knows the truth; his brother is a coward.

On Benny’s fifteenth birthday, he becomes an “adult,” and has six weeks to find a job, or his rations will be cut in half. With hunger looming, and the best jobs long gone, Benny turns to his brother, Tom the Bounty Hunter– zombie killer for hire– to ask for a job. He doesn’t want to join the “family business” but doesn’t see any alternatives.

What he learns about the world outside his town’s fences– the Rot & Ruin– and about his brother will change Benny’s life forever.