A Girl, A Ghost, and the Hollywood Hills 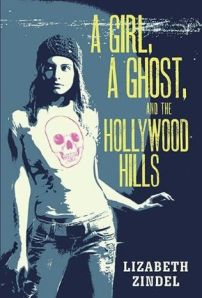 Sometimes I have far too much fun exploring the newly-input lists at the local library, and I end up with my holds maxed out at 10 and more items I still wanted to get. This is one of those books. It’s a Hamlet spinoff, but it follows the interpretation which I don’t entirely agree with.

Something is twisted in the state of Cali

It’s winter break, and Holly has come home from boarding school to face her dad’s new girlfriend, Claudia– who also happens to be her mom’s sister. Gross. Holly’s mom died less than a year ago, and already Claudia has taken over her movie production company, her house, and now her husband.

Then the ghost of Holly’s mother appears, claiming that Claudia murdered her. Holly vows to avenge her mom’s death no matter what it takes, but as the stakes get higher, she starts to wonder: What does this ghost really want from her, and why?

Throw in an adorable college guy named Oliver, an all-night house party with a pack of Australian surfers, and a shopping disaster on Rodeo Drive, and you wind up with a Hamlet-inspired ghost story unlike any other.

It was ridiculously early as I sat on the steps of Reed Hill waiting for the cab to take me to the airport. I was bundled in my favorite red peacoat and warm hat with earflaps that looked like some nice grandma had knitted it.

Of all of Shakespeare’s works, I am perhaps most familiar with Hamlet. I have read Hamlet in Klingon, I have read the Skinhead Hamlet, I have read Naomi Iizuka’s Blood in the Brain where Hamlet is re-set in 1980s Oakland. I have read two variations of the Hamlet Graphic Novel, and I have seen it performed a half-dozen times by a variety of troupes, and yet I still don’t have a concrete opinion on whether Hamlet is actually crazy, or whether he is pretending to be crazy. All I can say for sure is that I hate the Oedipal interpretation of Hamlet’s relationship with Gertrude. It angers me. And why is it there? Because some stupid actor in tights decided that Hamlet must be in love with his mother. (I believe Olivier’s Hamlet was the first to be Oedipal*.)

I love reading what modern authors do with Shakespeare, because he borrowed liberally from other works, so why shouldn’t contemporary authors borrow from his tales for inspiration? I’m also extremely grateful when they disregard Freudian readings, because as my rant may have suggested, I rather dislike them.

Holly is an admirable stand-in for Hamlet; she is similar enough that there is more than a passing resemblance, but she also manages to be a unique character. She may follow Hamlet’s path of folly, but she is not just a female shadow. Holly is a distinct character thrown into a familiar situation.

She’s just come home for the first time since her father started dating her aunt Claudia, and while it’s hard being home without her mother there, it’s even harder for Holly to come home and find her aunt’s things all over the house. Her aunt who makes cheap horror movies when her mother made art films, her aunt who wears animal print and cheap designers when her mother was bohemian, heck, just the fact that it’s her aunt has her pretty wigged out.

While A Girl, a Ghost, and the Hollywood Hills bears a more-than-passing resemblance to Hamlet, it does manage to own the story and take its own path. Holly is a great character, with a good supporting cast, and I believe it would be a fun story even if you haven’t read Hamlet as many times as I have. It scores a solid 5/5. I’d suggest it to any and all of my YA-lit readers.

* For those of you academically inclined, or especially interested in Freudian literary analyses, check out: Donaldson, Peter. “Olivier, Hamlet, and Freud.” Cinema Journal 26.4 (1987): 22-48.**

** Yes, that is MLA formatting (aside from the hanging indent), and yes, I did just find that in my old notebooks from the Hamlet class which I took.